Playing with Framing, Cropping, Drawing with Paint, and Contrast

Sketchbooks are wonderful places for experimenting.  At the beach, I made two quick decisions while sketching and painting the stranded boat.  Firstly, I left the sketch unframed; this may have been an unconscious decision, as I have a tendency to dive right in without thinking.  While painting, I deliberately left the foreground trees mostly white, in order to draw attention to the boat.  Before I left the beach, I took a picture of the scene for later reference.

Back home, I did a couple of experiments.  I mostly wanted to play with adding more color and framing, so in the first experiment, I first drew a frame to draw the picture in.  I did no drawing, but started right in with the paint.  (Thanks to Alisa Burke for giving me the confidence to try this!) Only after painting did I add a few details to the boat with pen. 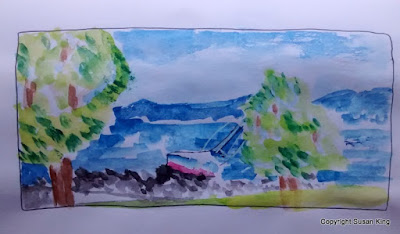 I didn't like this much, the boat had "disappeared", so I tried another, cropping the photo so that the boat was more prominent. 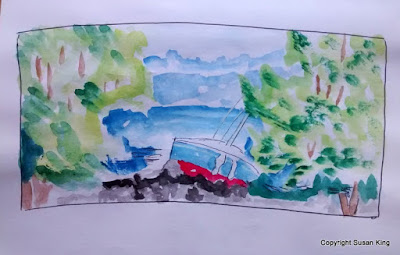 I didn't like this as much as the original sketch either, which had more contrast between the elements, thereby emphasizing the boat, making it more dynamic: 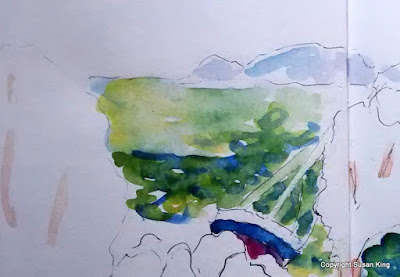 These experiments were useful, although I realize now that I might need to do another one to fully decide about the framing.
Posted by Susan at 9:52 AM 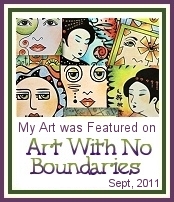